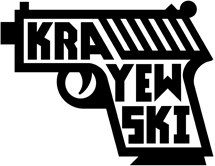 My first poster came about in 1956 when in the town where I lived after the war, Wroclaw, appeared a young woman, who looked sort of like Julliett Greco, who had the aim to set up a small experimental existentialist theater. That town and those times I wrote about in my book SKYLINER, published in Poland in 2009. Apparently I must’ve been talented because having almost no artistic training, this first poster designed for the JG look-alike and her experimental existentialist theater wasn’t a half-bad professional poster in the prevailing then 100 x 70 centimeter format. Long after this, in 1963, under Professor Henryk Tomaszewski’s poster school, I earned a master’s degree from the Warsaw Academy of Fine Arts. The entire time I occupied myself creatively, mainly designing film, theater, and even political posters. My posters took me throughout Europe—Vienna, Munich, West Berlin, Rome, Cannes. At the end of the 70s I slowed down a bit with the posters and spent more time on painting. I painted in large format, very geometrical paintings most closely resembling the style art deco. In 1985, I found myself in New York, where my two sons were born, and later we lived in New Jersey. When in 1987 I had a large exhibit in a renowned but no longer existing gallery in South Hampton, all my paintings were sold, and the most expensive, “SEX AND BUSINESS,” (60×78’’) went for $17,000, which was in a certain sense for me a success. Spending the next 15 years exclusively working on painting, two were nonetheless used as posters. The painting “BOOGIE WOOGIE” (oil on canvas, 42×58’’) was used for the 1997 Panasonic Jazz Festival and the painting “HOLLYWOOD HOLLYWOOD” (oil on canvas, 60×80’’) for many years was the official poster of the New York Film Academy. In the year 2005, the twenty years younger than me mother of my children, Yagoda, passed away. After her death I returned to the pop art style in which I worked in the 60s. After 2005, I began working on posters for a theater company in Poland as well as collector’s film posters. Like a real man at the end of his life is unable to count the number of women that he had or who had him, in that way I similarly can’t count my posters. There’s a lot of them. – Krayewski